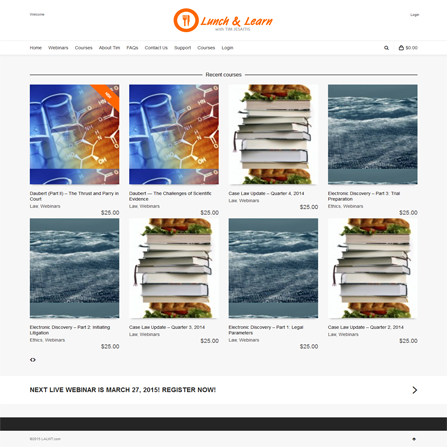 Yep, I’m the speaker with the sneakers! Thanks to a comical wardrobe malfunction several people know me for my peculiar conference attire.

Tim began his law career at Henderson Franklin in Fort Myers, under the mentorship of Albert M. Frierson, Esq. (pretty much the man who wrote Chapter 440!). What heady days — learning the practice of worker’s compensation, traveling to Tallahassee for legislative sessions, and then being a principal drafter of the Florida Administrative Code after the 1994 session, reformatting all those rules and regulations (forms, forms, forms!).

After becoming board certified in 1997, Tim moved back in St. Petersburg where his family lived. With his wife and two young daughters, Tim opened his own defense practice. In 1998, Tim returned to the classroom, this time on the other side of the desk at Stetson, an adjunct professor teaching — what else? — workers’ compensation. From 2004-2008, Tim served on the Executive Council for the Workers’ Compensation of the Florida Bar.

Beyond the practice of law, Tim keeps very busy with his family. His oldest daughter attends the University of Florida, and his youngest daughter will be graduating from St. Petersburg Catholic High School in 2012. He has been married to his wife Susie for over twenty-five years. He had been the Chair of the Lutheran Church of the Cross Day School Board and now is an Elder for Cornerstone Bible Church.

Known for his analysis and humor, Tim now takes his show on the electronic road. He’s transformed and updated his seminar materials into these continuing education classes.